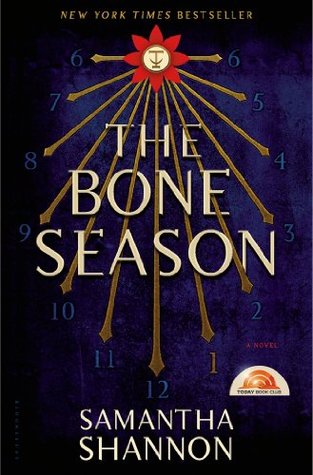 I’m going to start doing book reviews here. I mean, I have blog. Why not use it. I think I’m gonna go back to do reviews on some of the books I’ve already read this year as well. I might lump some books in together. Like The Daughter of Smoke and Bone trilogy (going to read the 3rd book soon) or the Anna/Lola/Isla books by Stephanie Perkins. We’ll see. But first, I’ll start with The Bone Season by Samantha Shannon. After I finished this book, I hugged it. That’s how much I liked it.

Short Summary
The story focuses on Paige Mahoney. She’s a 19 year old clairvoyant. People that are clairvoyant are considered “unnatural”. I want to say clairvoyance is frowned upon, but that is an understatement. She lives in London. It’s 2059 and London is under Scion law. Many cities are under this law as well. Paige works  in the criminal underworld and she is a part of a group called the Seven Seals. One day she gets kidnapped and is taken to the lost city of Oxford. There she learns why London is under Scion law and she is assigned to Warden. He is someone she doesn’t want to trust, but she may have to for her freedom.

I really enjoyed this book. The main character did get on my nerves at times. She was really stubborn. But, I wondered what I would be like in her situation. Her freedom had been taken away from her. I really don’t know if I would have acted any differently. I enjoyed the secondary characters. Liss and Julian were good allies for Paige. Warden was awesome. I envisioned him as her guardian. He protected her even though she hated him. He had his reasons for it though. Nick was great. Jaxon can get punched in the face anytime soon. Michael was adorable.

I enjoyed the pacing of this story. I really didn’t want to put it down. I’m excited for the next book which just recently got pushed back to January 2015. That’s okay. I have so many other books I can read before then. I will definitely be buying the next one in this series the week it comes out.